“We are all in the gutter, but some of us are looking at the stars.”
–Oscar Wilde

So, my mom encouraged me to start blogging again (hence my recent post about doing Ironman Lake Placid next year.) And I’d like to be a real blogger, who posts often, with all kinds of interesting thoughts and whimsical comments … to entertain my massive following 😉

But the truth is, I don’t really have much to say that I think other people would want to read. Let’s face it: there’s a lot of crap out there to read on any given day… With email, and Facebook, and Twitter, and texts, and news, and dare I say actual work-related, school-related, or even book-related reading to do… we must all pace ourselves. If I’m going to throw one more thing onto your reading list, I feel like it should be worth your precious time and attention.

Yet, here I am trying to come up with something — so the Internet engine won’t mark my site with demerits for being dormant.

Therefore, I figured I’d start posting some stream-of-consciousness-like thoughts from my recent training runs (since that’s where I usually think of the little kernels of stuff to write about anyway). It’s like you’re getting the clay before it’s formed or the wine before it has fermented. Grey, lumpy matter and some grape juice; that’s what this is, people. Don’t say I didn’t warn you 🙂

For me, the kernel of thought usually starts with a little music. So, I shall also share my running playlists just for the fun of it. Maybe someone out there will find that interesting. (Others will roll their eyes, but that’s okay. I can handle it.)

“I just saw the sun rise over the hill. Never used to give me much if a thrill. But hey, man, now I’m really living!”
–Eels

On one of my most recent training runs, I was listening to the playlist I’ll post below. It was also on this run that I twisted my ankle, scraped up my knee (see photo), and smacked my new iPhone flat against the paved trail when I fell. But luckily, my awesome phone case protected it, and it seems perfectly fine. 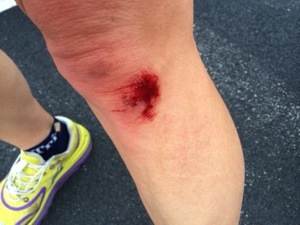 I’m happy to say that my ankle was fine enough for me to keep running, and I am trying to be nice to it now – so it will heal completely.

Also during this run, I became preoccupied with stars, due to several songs included in this playlist… We recently went to see one of my favorite bands – Bell X1 – so they featured prominently in the list.

I have an extremely emotional and religious attachment to the Bell X1 song Rocky Took a Lover. It’s about a homeless person (Rocky) and his lover, and how Rocky is fascinated by stars. Which, if you have no roof over your head, is a nice thing to feel that you *do* have… God knows, those of us who are not homeless don’t look at the stars nearly enough. Rocky and his lover also seem to have a difference of opinion about Jesus (or at least that’s how I hear it). And the lyric, “He said, I’ll shine for you,” pretty much always makes me tear up. Sometimes, I think about it religiously, and sometimes I think about my husband and how we both want to “shine” for each other… Like stars…

“He said they’re like headlights in the rear view mirror – they’re closer than they seem. And from this gutter, we’re still staring at the stars.
–Bell X1

Another thing I was thinking about during my run was that the Ironman World Championships in Kona, Hawaii, are coming up. I think it was when we went there to see our friend James do that race many years ago, that we watched the stars at night, and I got to see shooting stars and satellites crossing the night sky for the first time. Last year, before Kona, one of my favorite pro triathletes, Linsey Corbin, posted a series of videos about her preparation for Kona. That’s where I heard the song Souls to the Coast by Joyshop. With the ukelele as the main accompaniment, it is such a perfect backdrop for a video showing a bike ride to the Hawaii coast.

“You’re in the gutter, but your dreams will turn to gold.”
–Joyshop

Now, I will be preparing for *my* version of Kona: Lake Placid … one of the most epic Ironman races in the U.S. … So, now, I am eagerly putting together my “theme songs” for training. And so far, one of them might end up being the rather lame but infectious song Sky Full of Stars by Coldplay. I was originally disappointed with a song that starts with the chorus and simply repeats it in various forms. But it has grown on me, and there was this obsession with stars during this particular run. So, we’ll see. It’s definitely not the Coldplay I used to love. But it has a good beat and you can dance to it 🙂

“‘Cause You’re a sky, ’cause You’re a sky full of stars, I wanna die in Your arms.” …”Cause You get lighter the more it gets dark, I’m gonna give You my heart.”
–Coldplay

So, now that you know some of my “running thoughts”, here is the playlist that inspired them:

Feel free to leave a comment with your playlists or the random thoughts from your recent swim, bike, run, or other meditative activity…