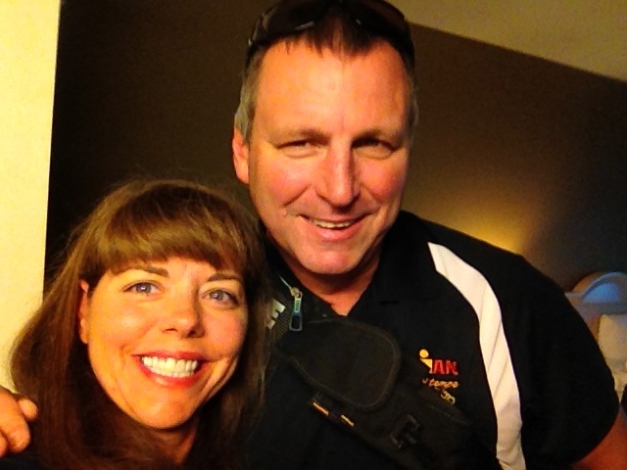 So, I’ve mentioned my husband, Craig, from time to time. But I’ve never written a post all about him. And, truth be told, if I could choose the one blog post that I’d want people to read, this would be it. I mean obviously I’m partial, but I think he’s a pretty cool dude, and the world should know more about him 🙂

He and I will be training together for two tough Ironman races this year, and I can hardly believe it! However, if I had to pick someone to train with, who can help me get through just about anything, it would be him. He’s the kind of person you’d want to have in your foxhole for sure.

So, how and why am I lucky to be married to this man? Well, I really can’t sum it all up in one blog post. But I figured I’d focus on one of the most remarkable traits about my husband… and that is that he can talk to just about anyone. It doesn’t matter who he might encounter on a given day, he will talk to to them… make a joke, take an interest in them, take some time. He’s never too busy or too self-centered to just talk to people. (I am quite the opposite, by the way…) Seriously, in all the places we’ve lived and the things we’ve done together, I only know our various neighbors and many other people we’ve encountered because of Craig. We’ve had fabulous neighbors and remain friends with many of them — only because of him. How lonely and limited my life would be if not for him! And then, there are the people who work at the local market, or the people at our gym, or random people who work in his building that he just happened to strike up a conversation with. It’s really a gift, I believe. And it’s not just a gift that he has. It’s a gift that he gives. He jokes with people; he puts them at ease; he brightens their day.

And on top of just talking to people, he remembers stuff about them. We won’t have seen some of these people for months or even years, and yet Craig will remember something about their life or whatever they had going on and he’ll ask about it. It’s so easy to be too busy for other people, but he hardly ever is. And I benefit from all this in many ways. Not only is my life richer through knowing people better. But it also reminds me to try to be more like that… To try to encounter other people and celebrate life with them –even on the smallest level.

If you think about it, life is like a dance. We encounter people everyday, and we sort of do a dance with them. We say hello, ask questions, exchange ideas, thoughts, complaints, etc. There is a give and take there, but we don’t always make it a fun exchange, the type you look forward to. I feel like the dance I do with people on a daily basis is sort of like a waltz… very formal, not too exciting, nothing memorable. But I feel like Craig’s dance is more like a disco. It’s fun; it’s humorous; it doesn’t take itself too seriously. You look forward to it, if for no other reason than because it’ll probably make you laugh. I’d like to be more like that. Let’s disco, baby!