I Want to See Where the River Goes

Sometimes you find what you’ll need, even though you don’t know how bad you’ll need it.

Two weeks ago, my husband, Craig, and I went up to Lake Placid, NY, to preview the Ironman Lake Placid (IMLP) course. We’d been there before, and Craig’s done the race before. But I never imagined I’d actually do this race when we were there before. So, this was my time to see it with different eyes. We drove up on a Saturday and were there through Monday.

Having seen the area before, and now having seen it on the Computrainer several times, I started to get butterflies in my stomach when we entered the town of Keene. This race is so monumental to me. I’ve sort of built it up into something bigger than it actually is. Luckily, this trip allowed me to live and breathe it a bit, so I can now imagine myself doing it. 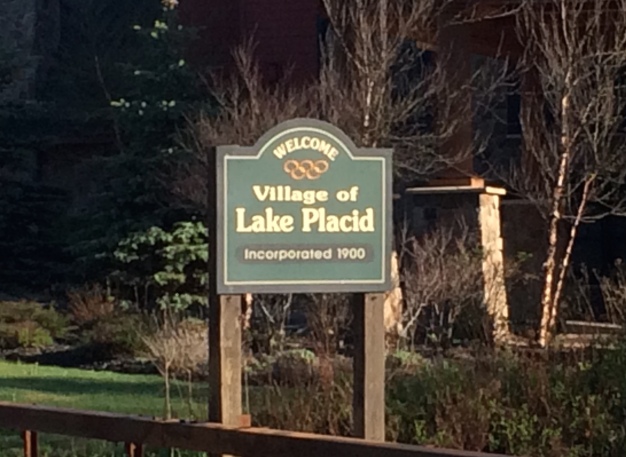 We got checked into our hotel and made a stop at the local bike shop, Placid Planet Bicycles. We also went to the local Price Chopper grocery store and got food supplies for the next couple of days. The weather was perfect. We would ride one loop of the (two-loop) bike course on Sunday, and run one loop of the (two-loop) run course on Monday, then drive home. We didn’t bring our wetsuits for the swim, because we thought it would be too cold. But, remarkably, there were people out there swimming, even in mid-May. 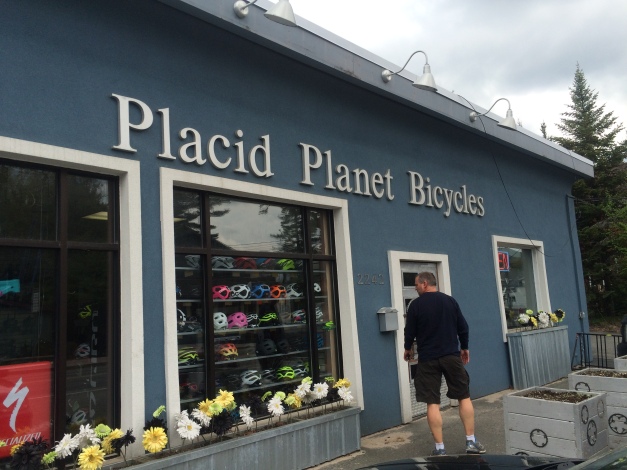 Our morning ride started out a little bumpy. I had changed my wheels out before the trip – to take the better gearing off my road bike and put it on my tri bike. So, in a way, I had calmly practiced changing my tires. And I felt pretty good about that. But riding down out of town that morning, I immediately got a flat on my rear tire. (So, out of the two tires, the rear tire is the hard one to change.) Anyway, I started trying to change it, and even though I’d practiced and felt like I knew what I was doing, I got flustered and frustrated. This made Craig frustrated also. I changed the tube out fine, and inflated it with the CO2 cartridge. But then I couldn’t get the wheel back on my bike. Craig finally took over and did it for me in about 10 seconds. This was definitely the low point of the entire trip. But we rolled on.

Getting really underway on the bike helped clear our minds, and I resolved to practice changing my tires every day until the race. (It hasn’t been quite that often. But, I have been practicing!!!) Descending into Keene was really the only part I did not like. I’m not a good descender, and I really slow down on the downhills. It’s actually a little embarrassing, but I’d rather go up-hill all day than do a long, winding descent. The other thing was that the road surface was pretty rough in some spots. So, I was already braking for the downhill, and then I wanted to slow down even more for the potholes. Maybe, just maybe, they will be fixed by the time we race in July. The Whiteface Mountain section on the way back to Lake Placid was pretty challenging, but not as bad as I thought it might be. The Computrainer version of the course is an old course, so this part was different from what we’ve been practicing on at home. But one thing that is the same is the “three bears” section. There are three famous hills coming back to town: Baby Bear, Mama Bear, and Papa Bear. Someone has even marked the road, so you know when you’re on each one. I was so glad to get to Papa Bear and find out out it wasn’t ridiculous or impossible. All in all, it was a beautiful ride, and I look forward to doing it in the race. Having said that, doing it twice after a 2.4-mile swim will be a different story. But still, it’s doable. 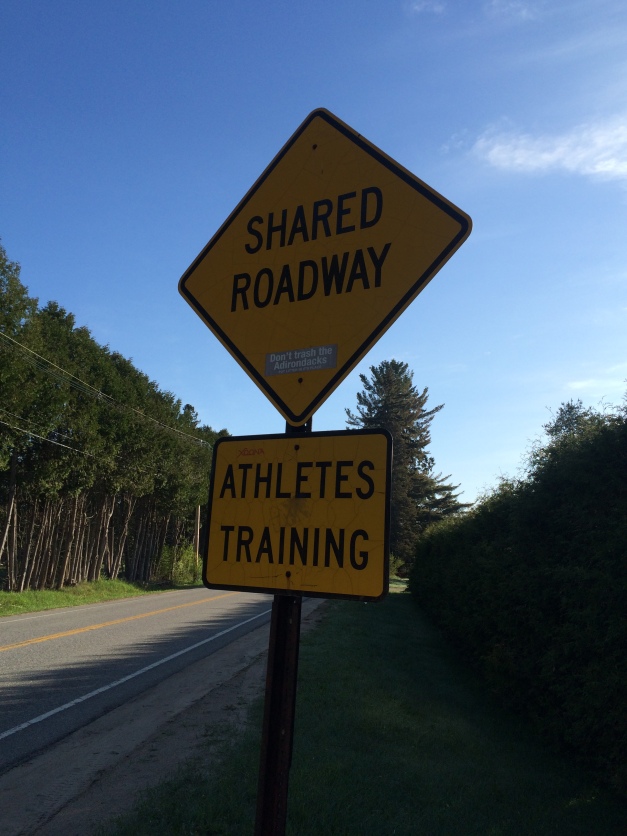 After our ride, we took in the fabulous views of Mirror Lake, where the swim takes place. We ate at the Lake Placid Pub and Brewery, which looks out on the lake. It was so good! And, our waiter is a triathlete who lives in LP year-round. So, it was fun to talk to him and get the scoop on what the town is like from his perspective. He is training for Ironman Wisconsin. So, he and Craig talked about that course, since Craig has done that race also.

The next morning, we got up and drove down to the center of town to do the run. The first part is just running out of town. But pretty soon, you are seeing the Olympic ski jumps and running by a beautiful farm, and then… you run along a lovely, peaceful river for most of the course. I couldn’t believe how nice it was. And it’s mostly flat, except when you run back into town. That’s when the run really bites you – when you finish each of the two loops and have to run up the hills into town. But other than that, you have the most pleasant run ever. I really hope I get to do a lot of it in the daylight, because it’s so nice to look at! My pictures don’t even give you a sense for what it’s like. I’m sure it will be different in the afternoon/evening than it is in the quiet morning. But still, this is the kind of run I love…

It really made me think about why I love to run, even though (as you’ll understand in a moment), it’s probably the worse thing I could be doing right now. In the simplest terms, it comes down to this: I love the zone-out. I love exactly what other people hate about running: the boredom. I love that it’s not about what is going on around you, but what is going on in your own head. Everything around you is calm and peaceful and nothingness, giving your mind the chance to go off and figure itself out. I’ve solved nagging work problems and complicated personal problems on so many runs. And this experience — of running the Lake Placid run course — helped me come up with my “theme song” for this Ironman.

As you may know, when you compete in something like an Ironman, you can’t run with earphones and a music player of any kind. I do a lot of run-training while listening to music (especially while on the treadmill). But I try to do some training without, because I know I won’t be able to listen to music in the race. So, instead, I come up with “theme songs”. These are songs I like to listen to, that get stuck in my head. That way, I can “listen” to them anyway (in my head), while I’m doing the race. I might have one song, or I might have several. But for this race, I’ve chosen the song “Boredom and Joy” by Jets Overhead. Aside from the fact that I can think about the boredom and joy of running in general, it also has the chorus, “I want to see where the river goes.” And I just think that’s so perfect for the IMLP run course! You’re following this lovely river for a good little while. Why not think of following it until you see where it goes? By the time I do it for the second time, I’ll probably be delirious anyway; so, maybe it won’t bother me that we don’t actually ever get to see where it goes.

Unfortunately, though, the week after we returned from our Lake Placid trip, I re-injured my hamstring. I won’t bore you with the details. Let’s just say that I know exactly the moment when I did something to it, and it took my breath away. And, now, there is no doubt that I need to let it heal as much as I can. I did nothing but swim for the week following that fateful moment. And, in our first race of the season, Rock Hall International Tri, I switched to the Aquabike division (where you only do the swim and the bike; no run). It was the right decision. Some think I shouldn’t have done the race at all. But, so far, I think I’m okay. And, as a bonus, I placed 2nd in the Aquabike! (Woohoo!) Of course, that was a much smaller field, but I have to be happy about it, because I don’t get on the podium very often 🙂 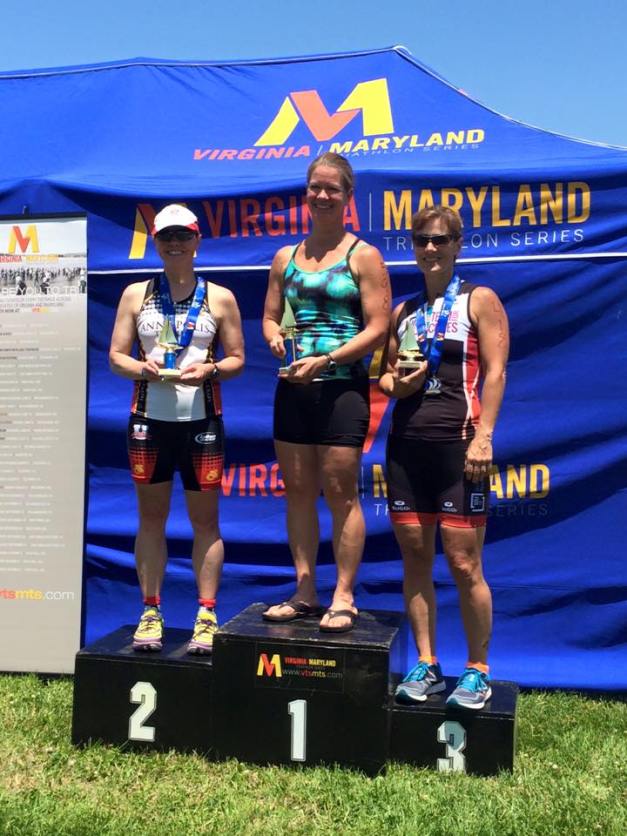 Now, I have two weeks until my next race (Eagleman 70.3) and eight weeks until IMLP. I plan to swim a lot. I don’t know if I will run at Eagleman, but I do plan to try and do the swim and bike. Right now, I feel like my injury is such that my hammy can handle it. But I will take it day by day and decide as I go. Ultimately, each decision will be with IMLP in mind. I want to make it to the start line. And, when the day comes, I want to run down that river road and see where it goes.

3 comments on “I Want to See Where the River Goes”